How did the Black Death spread?

Fleas, rats and puss-filled boils – find out how the bubonic plague killed millions History has seen many pandemics, but the bubonic plague, better known as the Black Death was one of the most devastating. This infectious bacteria is believed to have originated in China in the 1330s and was most likely spread via rat fleas on merchant ships, arriving in Europe in 1347. Tens of millions of people died, and records show that victims were from both poor and very wealthy backgrounds – the plague did not discriminate.

It became known as the ‘pestilence’ or ‘great mortality’ because of the high death rate. Coffins couldn’t be made fast enough to match demand, so mass graves or ‘plague pits’ were built. One observer noted, “There were hardly enough living to care for the sick and bury the dead.”

No one knew what caused the plague, meaning people often invented wild and even prejudicial theories – from exposure to bad air to the movements of the planets, or even Jews poisoning wells. The death and destruction led many to believe it was the end of the world, driving some people into madness. 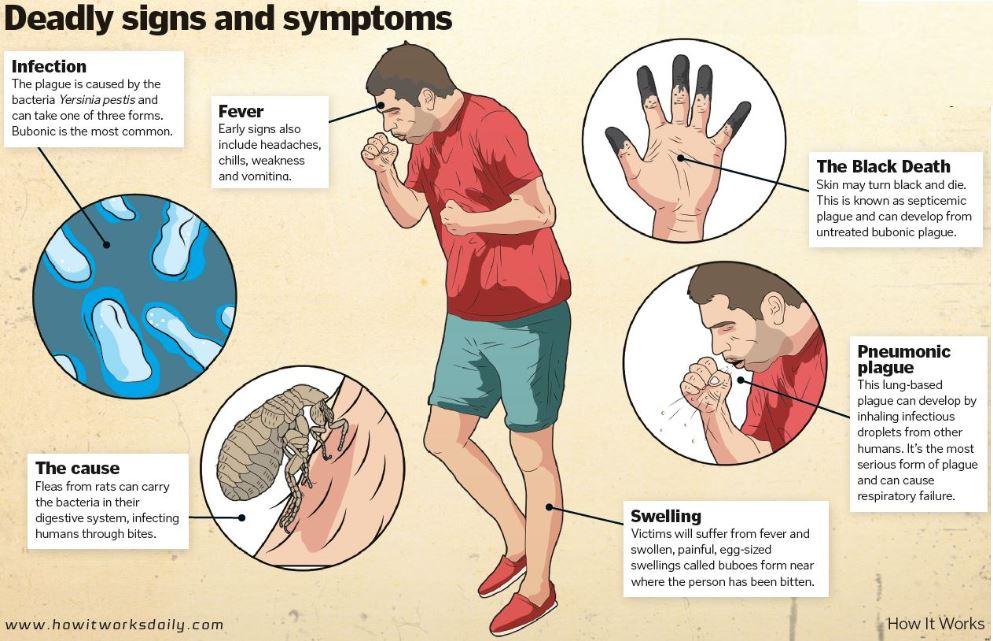 Once the plague subsided in the early 1350s, those who survived demanded change. It’s been argued that this resulted in the collapse of feudalism, the medieval system of power at the time. Laws were introduced in a bid to prevent labourers commanding higher wages and even dictating what clothes they wore, but the plague had caused a permanent change to society throughout Europe.

As many as 50 million people had died across the continent, but the nightmare was not over, and the disease reappeared over several centuries until the bacterium was uncovered. In fact, the bubonic plague still exists today, but thanks to modern medicine we now have a way to fight back.

How the deadly plague spread In urban areas where rodents tend to live in large numbers, the plague bacteria passes between rats and their fleas.

The plague bacteria multiply in the flea’s stomach and cause a blockage.

After 10–14 days the infected rat colony dies, and the fleas turn on humans in search of fresh food

The plague enters the human’s bloodstream, and symptoms manifest within three to seven days.

This article was originally published in How It Works issue 128, written by Jodie Tyley