How do baleen whales feed?

You might think the largest animal in the world, the blue whale, would feed on prey of a similar size to it, but its diet actually consists of one of Earth’s smallest animals: krill. These tiny crustaceans swim in large groups, making it easy for the blue whale to gulp them down. It can do this thanks to its enormous mouth and something called baleen. Blue whales are one of 12 baleen whale species, characterised by the baleen plates that hang from their upper jaw. These plates are made from keratin, the same material as fingernails, and form a fringe or curtain at the opening of the mouth. While scooping up large quantities of plankton, krill and small fish, the whales take on gallons of water. The baleen allows them to filter the prey from the water as they spit it back out. There are four different families of baleen whale, and although they all filter feed, they each do it in a different way. Right whales and pygmy right whales, such as the bowhead whale, feed near the surface, skimming the water with their open mouths. Rorqual whales, such as blue and humpback whales, tend to dive deeper for their prey and have areas of pleated skin called throat grooves that enable them to expand their mouths and take in more food. The final family consists solely of the grey whale, which filters its prey from water and mud that it sucks up from the ocean floor.

There are around 80 different species of whales, dolphins and porpoises, and they can be divided into two groups; baleen and toothed. While baleen whales feed on small prey, toothed whales, such as orcas, hunt for much larger creatures like seals, sea lions and other whales. They use their teeth for grasping and tearing, often swallowing their food whole, and find their prey using echolocation. Baleen whales are typically larger and slower than their toothed counterparts, with two blowholes rather than one. They also have a much larger tongue and make lower-frequency noises. 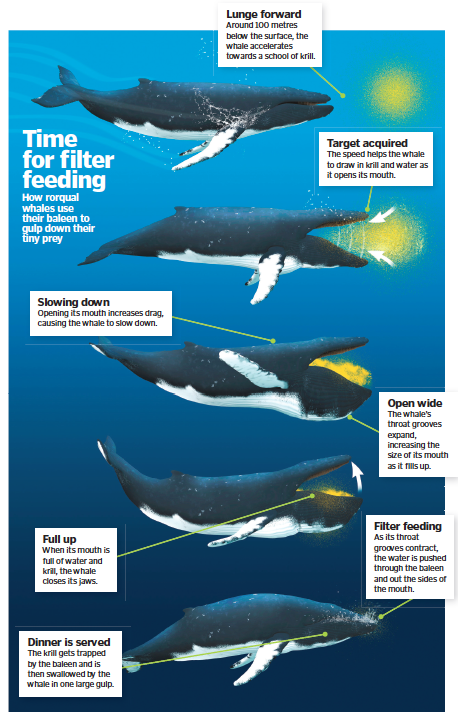 For more information about science and technology, get the latest copy of How It Works now from My Favourite Magazines. If you have a tablet or smartphone, you can also download the latest digital version onto your iOS or Android device. To make sure you never miss an issue of How It Works magazine, subscribe today!

What does it take to sustain a whale shark?