How did the Titanic sink?

From the early tragedies to the last recorded words, discover the events of the 'unsinkable' ship The air was buzzing with excitement ahead of the launch of Titanic in 1912. Measuring 269 metres in length, it was the largest and most extravagant ship anyone had ever known. Departing for its maiden voyage, around 2,200 people boarded Titanic along its route from Southampton, England, to New York City, USA. For over 1,500 of them it would be the last trip they ever made.

The passengers were a diverse mix; wealthy holiday-makers and working-class immigrants searching for new opportunities in the land promising the ‘American dream’. Due to less space being allocated per person in lower classes, there was a third-class majority on board. Classes were strictly confined to specific areas of the ship. Titanic was designed to prioritise comfort rather than speed, but was comfort also prioritised over safety? Carrying some of the richest people in the world at that time, it was a huge leap forward in luxury travel. Conditions in second-class cabins were similar to other cruise ships’ first class, and Titanic’s passengers were provided with gyms, pools, libraries and huge restaurants.

Problems with the vessel occurred from the outset, with a series of accidents and near-misses. While the deaths of those aboard Titanic when it sank are well-documented, the first victims were in fact its builders. It took around 3,000 men to build Titanic over two years. During construction, before the ship had even touched water, eight workers lost their lives, and there were 28 serious accidents recorded.

Further accidents nearly occurred when the ship left Southampton ahead of its maiden voyage. When pulling away from the port, it came within a couple of metres of crashing into another vessel. Many of the passengers were alarmed by this bumpy start to the journey but were unaware of how this event would soon pale into insignificance.

On the whole, passengers were confident that they were safe while confined to this ship, isolated in the ocean. The luxury liner was branded ‘unsinkable’ by ship designers, because it was built to stay afloat even with major flooding. But this unsinkable ship would go down – both into the ocean and history.

During the evening of 14 April and into the morning of 15 April in 1912, just four days after setting off , Titanic sank. Two hours and 40 minutes after hitting an iceberg, the ship lay in pieces below the surface of the Atlantic. Some passengers had always doubted its safety, but other people died because they refused to leave on lifeboats, clinging to the hype of the world’s safest ship liner. Why would you voluntarily enter treacherous waters when you’re on a ship you’ve been assured could never sink?

The captain also showed the misplaced confidence held by most in shipbuilding at the time. Before his final voyage he said, “I cannot imagine any condition which would cause a ship to founder. I cannot conceive of any vital disaster happening… modern shipbuilding has gone beyond that.” Unsurprisingly, the disaster raised many questions about what was and wasn’t done at the time. Every action taken that fateful night has been analysed and scrutinised during inquiries. The wreckage, which still lies below the water, has been inspected in order to pinpoint where exactly the design failed. How could this tragedy have been prevented? 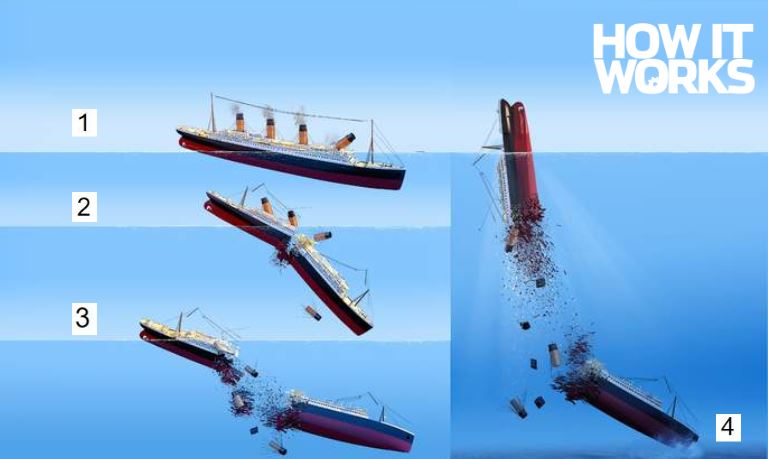 2:17 am - As the front of the ship sinks below the water, hundreds of people are washed into the ocean.

2:18 am - Titanic’s lights fail, leaving the ship in total darkness. With the bow filled with 16,000 tons of water, the ship tears apart at its weakest point.

2:19 am - After breaking loose from the stern, the bow plummets towards the seabed. Freed from the weight of the bow, the stern begins to rise, giving brief hope to those who were still on board.

2:20 am - Shortly after, the stern of the ship rises up once more, pouring an avalanche of Titanic’s contents into the ocean. Once vertical, the remainder of Titanic disappears below the surface. The rudder swings to one side, causing the huge ship to spiral the whole 3.7 kilometres to the bottom. The bow crashes into the ocean floor 27 minutes before the stern, despite beginning its descent just a minute earlier.

Radio log shows the wireless operators’ pleas for help during the final hours: